The Bellofram Rolling Diaphragm is a tough, flexible seal with a unique configuration that permits relatively long piston strokes while completely eliminating sliding friction. It was designed and invented by American Ingenuity and to this day is still made with pride in the USA. 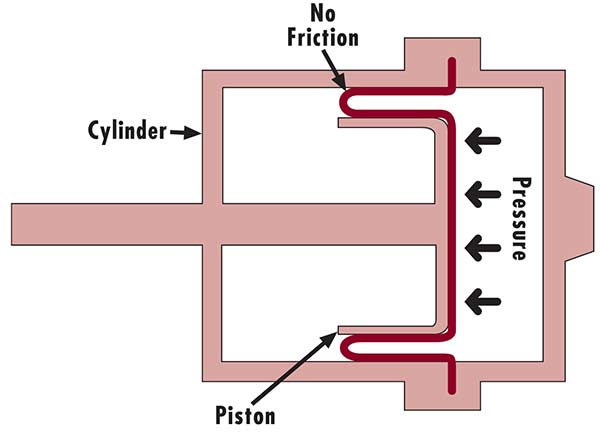 Bellofram Rolling Diaphragms are, in effect, pressure vessels having a variable volume and flexible moving sidewalls. As in any other pressure vessel, their strength should be considered with respect to safety factors. Generally, they are designed with a large safety factor. This means the maximum safe working pressure will be a fraction of the pressure that could cause failure of the sidewall.

In the second illustration, particularly, to that portion of the convolution in immediate contact with the cylinder and piston walls, it will be noted that the lines of unit pressure (acting in horizontal plane because they must be normal to the surface) force the diaphragm against the piston and cylinder sidewalls. The lines of pressure acting on that portion of the diaphragm not in immediate contact with cylinder and piston walls (semi-circular segment of the convolution) are shown. Each line of unit pressure acts in a direction normal to the semi-circular segment; hence all of the pressure lines can be replaced by their horizontal and vertical components. The sum of the vertical components is the total force acting on the semi-circular segment.

Diaphragm material is essentially a layer of specially woven fabric, impregnated with a thin layer of elastomer. Total thickness usually ranges from 0.015 to 0.045 inches. The fabric, which lends high tensile strength to the diaphragm, is designed to permit free circumferential elongation (allowing free rolling action) while preventing axial distortion. This eliminates stretching or ballooning during the stroke.

The flex life of the rolling diaphragm depends on operating pressures, amount of axial and circumferential stress applied during the stroke, and the materials which form it. In general, a properly installed Bellofram diaphragm should provide a life of millions of cycles. 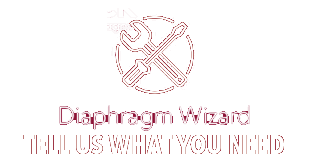 To make an analysis of your specific application, please answer a few questions. Our engineers will respond within 24 hours.

TELL US WHAT YOU NEED